Thanks to the adjustable climbing head, assembled to the Ides climbing console 200, the large area wall formwork can be moved 60 cm away from the concrete surface without the need for a crane. The climbing console, the assembly hook and the formwork can be taken up to the next floor as a whole by the help of a crane, thus saving a significant amount of labor and time. It is recommended to use wind spanners at high levels.

After the formwork is mounted the assembly hook ensures that the dismantling of the climbing hook and wind spanner, the repair of concrete, etc. workmanship can be completed easily and safely. This system, which is mounted by means of a crane, is fixed to the wall concrete and if necessary connected to the formwork and ensures great facility in the construction of high structures.

The consoles have full safety preferences appropriate to working on the exterior and they are able to bear all kinds of loads. The consoles are assembled only once during the first pouring of wall concrete and the same measures are used for the upper levels until the work is completed. During the assembly of the consoles to the wall formwork, the holes left in the wall concrete or the climbing conics left in the concrete and which can be demounted afterwards, are utilized. If you want to mount the formwork without dismantling it from the consoles, the climbing brace and the adjustable climbing head system are used.

In this system use is made of a secondary bracing which is assembled vertically in front of the horizontal steel wall bracings and props, which are on the climbing platform, adjusted to bracings with a 90 degree angle to the formwork. After the formwork is separated from the concrete, it is set up again for an upper floor together with the consoles. 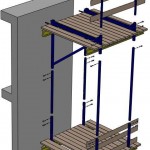 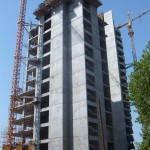 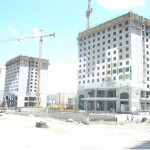 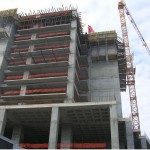 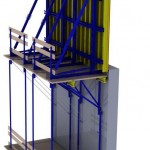 Thanks to jointed lift hooks seated on niches put in the concrete, the lift climbing platforms can be mounted to an upper floor without additional assembly or dismantling. 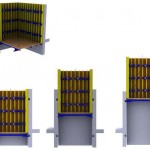 Powerd by Web Çözümleri
Back to Top